Home / About Us / News / Stories Celebrating Black History and Culture 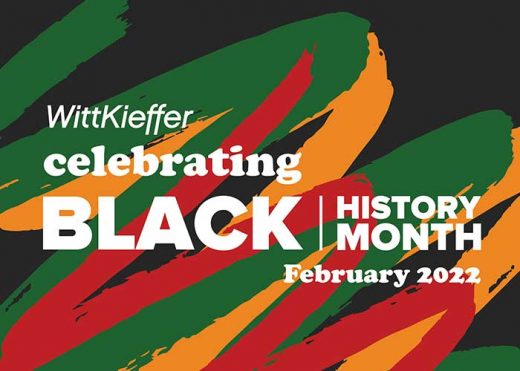 When U.S. President Gerald Ford officially recognized Black History Month in 1976, he urged Americans to “seize the opportunity to honor the too-often neglected accomplishments of Black Americans in every area of endeavor throughout our history.” To this end, we asked WittKieffer employees to write about a Black person or an element of Black culture that personally inspires them.

What follows are some of those stories of inspiration they shared:

On Elements of Black Culture

Black culture has greatly influenced many aspects of American life. This is evident in cuisine, music, fashion, literature and sports. Black culture has served as an inspiring and unifying part of our everyday lives. I am most inspired by the resilience of Black Americans. We are a people of hope and determination, and we continue to laugh, sing and dance while struggling for equality and justice. This resilience and hope is nurtured and developed in us from birth through our faith and community and is passed down from generation to generation. Hope and joy are deeply ingrained in my people. We are taught through faith to hope in all things, and the communities that support us remind us that nothing can take away the joy in our hearts. As Maya Angelou says, “You may trod me in the very dirt/ but still, like dust, I’ll rise.” These words resonate within me as I strive to promote a world that’s empowering for all.

One of the elements of black culture that inspires me is the celebration of black excellence. Recent studies over the years have shown that black women are the most educated minority group in the United States. Growing up in small-town, rural Mississippi, my parents and family always stressed the importance of getting an education and becoming my ancestors’ wildest dreams. I am proud to be in this elite group of black women. Despite this accomplishment, black women still experience a huge pay gap compared to their counterparts. In my role at WittKieffer, I pride myself on ensuring that our diverse candidates and placements, especially those that look like me, are treated and compensated in a fair, equitable way.

African American culture is not monolithic. Although there is now mainstream popularity of African American culture in the U.S., there is still great joy and pain in being Black in America. We all have life experiences that shape us, and mine are fond memories of years of attending summer camp during my formative years at a local church focused on teaching African and African American history not taught in schools. I spent my summers swimming and studying history, literature, art, and advocacy. I learned the black national anthem, Lift Every Voice and Sing, and African drum and dance, culminating in an end-of-the-summer program for family and friends. As a young child, I quickly developed a sense of pride in my heritage and the cultural differences within the African American community and across the diaspora.

My time at Tennessee State University (TSU), an HBCU (historically black colleges and universities), further enhanced this sense of pride. I found myself in an environment where my blackness was celebrated and TSU’s motto – Think. Work. Serve. – became ingrained in my psyche. I learned how to be of service to my community and the significance of competing philosophies of thought within our community, such as W.E.B. Du Bois’s Talented Tenth and Booker T. Washington’s Atlanta Compromise. There is a lot to unpack with looking at our history in America; slavery, colonialism, today’s issues surrounding the Black Lives Matter Movement, and voter suppression issues in our communities. Despite these challenges, I am inspired by the resiliency and pride within my community. Reflecting on this same resiliency demonstrated by my grandparents and those before them inspires me to do my part by helping others. My blackness is a sense of pride, and I’m committed to being a resource to others and serving my community.

The element that I find most amazing about the Black experience is our courageous spirit as a people. When you consider legacy-establishing individuals like Oprah Winfrey, Barack Obama, Dr. Benjamin Carson, and Princeton valedictorian Nicholas Johnson, these are examples of courage. It takes extraordinary courage to remain engaged in a society that still occasionally seems to adhere to a tainted definition of the word race – which once placed black people in the category of sub-human. Add to that, the drive it takes to remain persistent and focused on accomplishing your greatest work alongside adversity – adversities your peers with lighter complexions often do not face. Understanding that true change does not happen without sacrifice, it is important that we, like the individuals mentioned, stay engaged – engaged in arenas where we are often alone. Pioneers who understand that if we abandon the arduous task of inter-cultural relationship for the comfort of sameness, everyone loses. It is this courageous spirit that elevates us all.

There are several people who inspire me. One person that I have learned about in more recent years that has motivated me and made an impact on my foundation as an African American is William Leidesdorff, Jr. Leidesdorff, Jr. was a bi-racial African American who was one of the founders of the City of San Francisco. A highly successful businessman, he was a social, economic and political force prior to the gold rush. He is a perfect example of the accomplishments African Americans can achieve, given the opportunity.

I am part of an organization in San Francisco called SF Black Wallstreet, which pushes opportunity, diversity and inclusion for African Americans in San Francisco in the areas of Business, Homeownership and Financial Literacy and Education. Leidesdorff, Jr.’s story is a leading force behind our initiative. Leidesdorff is a part of the Heritage of Black San Francisco and also San Francisco as a whole. It’s impossible to create heritage if you don’t really know where you come from, and being a native of a city that was founded by an African American makes me even more proud. Heritage is built but a big part of it is the history. William Leidesdorff is Black History!

Growing up playing baseball, I always knew the story of Jackie Robinson from a young age but preferred to look to the titans of my era: Derek Jeter, Ken Griffey Jr. and Ryan Howard in particular. However, as I get older I have realized Jackie Robinson is one of the most inspiring people to me and one of the greatest Americans in U.S. history.

Jackie Robinson was not the biggest, fastest, strongest, or best Black American baseball player of his day. There were other excellent Black players to choose from when integrating America’s favorite pastime that made more sense from a baseball talent perspective, but Jackie was the best person to take on this monumental moment in history due to the man he was. The odds against Jackie finding success were staggering and the pressure of being the first Black player in the league was taxingly multi-dimensional. Being anything short of a star player could have delayed the widespread integration of the game, but more importantly, played into a problematic perception that Black Americans were not good enough to be more than second-class citizens.

With the unimaginable weight of the hopes and dreams of an entire group of people, Jackie went on to have a hall-of-fame 10-year career that resulted in being named the most valuable player in 1949 and winning the 1955 World Series. It may seem like Jackie was just a baseball player, but he represented so much more. He was a pioneer who held the door open for those behind him and led to many firsts for the Black community by helping change the perception of Black Americans’ abilities in a loud and undeniable way that transcended sport. Jackie’s perseverance, humility, bravery, leadership and individual strength allowed him to embrace one of the biggest moments in American history. His achievements from the burden he carried graciously expedited our culture in a way that is difficult to calculate or comprehend. If I can be a fraction of the man Jackie was and even a fraction of a fraction as impactful in our continuous fight for equality for all people, I would be happy.

We at WittKieffer thank the individuals above for sharing their stories. Join us in celebrating Black History Month and recognizing the many tremendous contributions of Black leaders and Black culture to our society.