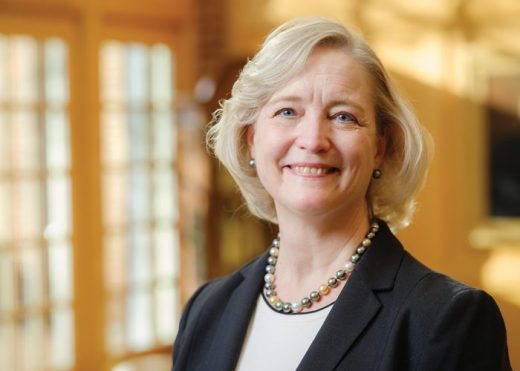 After an international search for the 14th president of Wake Forest University, the Board of Trustees, upon the unanimous recommendation of the appointed search committee, has named Susan R. Wente as the next leader of Wake Forest.

A renowned biomedical scientist and visionary higher education leader, Wente has served as Vanderbilt University’s provost and vice chancellor for the past seven years. She took on the additional role of interim chancellor from August 2019 to June 2020. During her tenure at Vanderbilt, Wente has advanced the excellence of academic programs and guided the university’s response to the pandemic.

“Dr. Wente is the right person to enable Wake Forest to seize the opportunities before it,” said Gerald Roach, chair of the search committee and the Board of Trustees. “Among a field of highly-qualified candidates, she stood out as a transformational leader and world-class academic who is committed to the personal connection and engagement that Wake Forest values,” Roach said.

Wente will become Wake Forest’s president on July 1, 2021. She succeeds Nathan O. Hatch, who has served as the University’s president since 2005.

“I have long admired the people associated with Wake Forest,” Wente said. “This is a special institution, committed to excellence with a tremendous ability to develop leaders of great integrity for our world. I look forward to joining the Wake Forest community and working with the outstanding faculty, staff, students and alumni to seize the multitude of opportunities for Wake Forest to excel even further as a national leader and model.”

The search process began on October 14, 2020, following President Hatch’s announcement of his intended retirement on June 30, 2021. More than 1,600 Wake Forest students, faculty, staff and alumni participated in the search process through an extensive community listening program led by the Board of Trustees.

The presidential search included an extraordinary field of diverse candidates who represented the full spectrum of the higher education landscape and several non-traditional backgrounds. Wente emerged as the leading candidate because of her unique combination of experiences, talents and passions.

Wente has been widely praised for her bold and engaged leadership and for accomplishing a number of firsts, including the appointment of Vanderbilt’s first female athletic director and the creation of the university’s Office of Inclusive Excellence. Wente led Vanderbilt’s efforts to launch a new structure for the university and medical center’s academic relationship. As provost, she has been the chief academic officer responsible for all 10 of Vanderbilt’s schools and colleges. She also developed the university’s 10-year strategic plan. Wente has overseen innovative initiatives to enhance the undergraduate experience and elevate the arts and humanities, and she served as the Vanderbilt faculty athletics representative for the Southeastern Conference and NCAA.

Wente holds a doctorate in biochemistry and began her teaching career at Washington University’s School of Medicine. She served on the faculty there from 1993 to 2002. She was recruited to Vanderbilt and served as a professor and chair of the Department of Cell and Developmental Biology in the School of Medicine. She advanced through the administrative ranks at Vanderbilt, serving as associate vice chancellor for research and senior associate dean for biomedical sciences, before becoming the University’s provost in 2014.