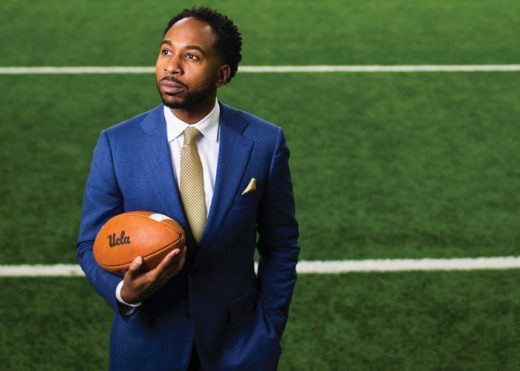 Martin Jarmond has been named as the next Alice and Nahum Lainer Family Director of Athletics at the University of California, Los Angeles. Jarmond becomes UCLA’s ninth athletic director.

“Martin is a principled, proven leader with a deep commitment to values that align with UCLA’s mission,” Chancellor Gene Block said. “From Rafer Johnson to John Wooden, this program has always inspired our student-athletes and supporters alike to persevere and excel. I am confident Martin will help UCLA carry on that storied tradition, with his exceptional leadership, high integrity and excitement for our future.”

“UCLA is an aspirational program in intercollegiate athletics,” Jarmond said. “Steeped in history and success, the tradition of legends and barrier-breakers who call themselves Bruins is unmatched. I am humbled by and grateful for the opportunity to serve as the Alice and Nahum Lainer Family Director of Athletics. UCLA Athletics aligns with my tenacious commitment to developing young men and women to be their very best academically and athletically.”

Jarmond has served as the William V. Campbell Director of Athletics at Boston College for the past three years. At UCLA, he will lead one of the nation’s preeminent collegiate athletics programs at the nation’s No. 1 public institution. His hiring follows a comprehensive nationwide search that began in January.